Showing posts with the label Mt. Webster
Show all 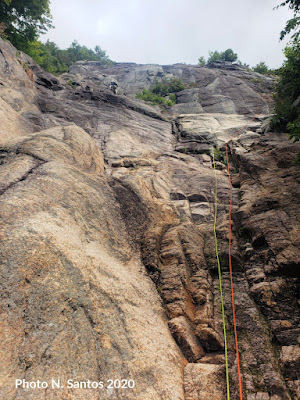 Lost In The Sun (5.5) Leading Pitch 1 Nuno and I headed to Crawford Notch, NH to do some multi-pitch climbing on Mt. Webster. It was our first time climbing on Mt. Webster. Nuno suggested Lost In The Sun (5.5) and I happily agreed so long as he led the hike up to the base of the climb.  I've never climbed on Mt. Webster but several years ago, while shopping at Lahouts in Laconia, an employee suggested I try this route. He even scribbled its name on a piece of register machine paper, which I still have.  We parked at the pullout opposite of Willey's Slide parking and walked east along the road. At the 45.6 marker we headed down and crossed the Saco River. We didn't see any trail so we just kept walking 'up' . After about 15-20 minutes Nuno found the trail with cairns and orange tape tied to trees. This brought us along the drainage gully. This gully got steeper and as we neared the base of the route, there were larger boulders, some of which were lo
Read more
More posts