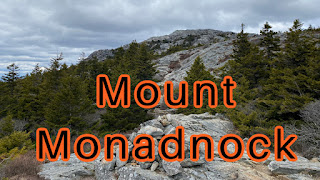 Fun scrambling to the summit of Mount Monadnock! Took the White Dot trail up, and the White Cross trail back down. About 15-20 feet to the right of the last cairn on the White Dot trail, I spotted a cool looking slab to scramble up. Clear skies for some beautiful views!
at April 10, 2022

It was a cold morning but good for getting some laps in while there's still ice in the area. For the most part, the ice here is still holding up. But some of the routes are baked/delaminated in the areas that get sun and hard and brittle in the shaded areas.

Wore a borrowed pair of mountaineering crampons but I kicked my way to the top. Grant it, it was my third try, but for my first day out climbing on a vertical ice wall, I did it! The climbs were exhausting but I was so happy that I was making my first ice climb. Growing up in Hawaii I never dreamed I would be ice climbing. Yet here I was, at age 51, celebrating yet another milestone in my life.

Kellie Barr-Foster, organizer for the New Hampshire Rock Climbing Meetup group, is no stranger to Stonehouse Pond. She has been climbing the Barrington, NH crags for many years, organizing many group climbs as well.  Kellie organized today's climb on the "Moss Slab". This single pitch is 30 feet high and about the same width. It's separated from and set off to the right of the "Main Cliff".

Since I didn't have mountaineering boots or crampons, I met up with Kellie at her climbing barn. Anthony and Mark were already ahead of me gearing up. Kellie and I take the same shoe size so I borrowed a pair of stiff leather boots and mountaineering crampons.

The hike into the Moss Slab is only 15 minutes from the main road. Dan got there ahead of us and later Doug and Eric showed up. We even had a solo climber show up...offered to top rope him but he made one "solo" climb and  then left.

At the Moss Slab, Mark helped me put on my crampons. I first watched Dan and Kellie climb two routes...the right route just a bit more vertical than the left route. When it was my turn, I tied into my harness and Kellie let me borrow both her climbing gloves and ice axes. The gloves were heavy duty and had padding for the knuckles. I learned that the back of your hands are on the ice while holding the axes.

It felt awkward at the first-swings and since I'm right-handed, my left-handed swings felt weak. I felt like I had to swing harder and more often than swinging with my right hand only because I couldn't get good axe hold. My first try I only got off the ground a foot. So I got off the rope and rested a turn. On my second try I remembered to keep my heels low in order to 'engage' the second row of spikes. But at 3/4 of the way I tired, so I asked to get let down. On my third try I climbed the route on the left as it was more of a 'slab' and not as vertical as the route on the right. It took a while, but I did reach the top! It was exhausting, but I was ecstatic to be ice climbing!

Afterwards I walked up to the top of the ramp with my webbing and tied-in so that I could photograph the others' climbs. I took as many photos as I could, trying out some different camera settings for various results.

Overall, the weather was perfect...actually warm and the company was superb! I had so much fun on my first ice climbing day. And having a lot of help and encouragement from the experienced ice climbers in this group made all the difference! Thanks to Kellie, as well as Mark, Dan, Anthony, Doug and Eric for making yet another memorable day for me!

** Click on the photos to see a larger view

Me with Doug on my right.

Sometimes random things get in my way....

Mark getting to the top!

What happens when you don't wear your helmet!

I just LOVE this photo of Anthony!

Eric back to climbing...with a helmet this time!

Dan with Anthony on his lead belay.

Anthony with Dan on his belay

Tied-in at the top!