Showing posts with the label leprechaun's lement
Show all 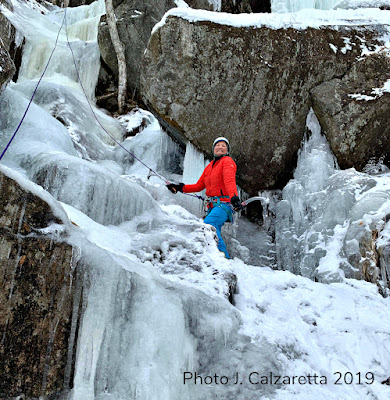 Pano photo left to right: LL gully, LL slab. Hanging By A Moment Leprechaun's Lement (WI2-3) Kinsman Notch, North Woodstock, NH The last of this season ice climbing for me....so I was glad I got to get in one lead. Like the past weekend at Arethusa Falls and weekend before that at Waterfall , we had the ice all to ourselves today. Overcast skies were sure promising and when we got to the base of Leprechaun's Lement, we were glad it was in the shade. For the most part, the slab was clear of snow. (below the base of LL lay the snow that had slid of the LL slab).  John led the Leprechaun's Lement Gully, then we rapped down into the vertical section of the slab where we did a couple of laps. We also did a couple of laps on the Hanging By A Moment. And finally, in the late afternoon, I led the Leprechaun's Lement Slab. I led the center since I had only led the left hand side of the slab. The ice on the first half of the route was really still good. But by that t
Read more 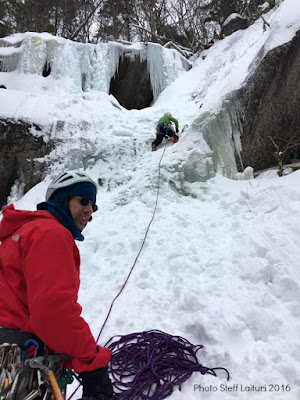 Thanks for the belay, Ken! Great to get out on the ice for the first time this season - a meetup event at the Kinsman Notch in Woodstock, NH. Just got a couple of top rope laps in but my last climb of 2016 was a lead on the fun & easy, Leprechaun's Lement. The grade was easy (WI2-3) but the ice brittle, so I re-bored a couple of screw holes.  At one point I looked up and thought that it would so much faster if I didn't place any protection and just climbed this route to its anchor. I have to admit that thoughts of solo-climbing an easy grade has crossed my mind several times. But I have to learn to keep mum about it. I find that openly expressing an interest in solo-climbing freaks people out.  Climbing this grade was uber fun. Shit, leading is fun! And if you've been reading my climbing posts, you've probably noticed that there have been several multi-pitch climbs where I have climbed as a "follower/middle" climber. I'm trying to get away fro
Read more
More posts