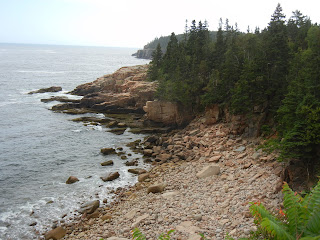 Otter Cliffs are a series of natural sea cliffs located just off the loop road in Acadia National Park. The cliffs are excellent for climbers of all skill levels, with routes ranging in difficulty from 5.5 to 5.12. And because they are so popular, a guide book states, "Don't hog the routes!" There is an access trail leading from the loop road to the top of the cliffs, where you can build your own anchor point or use one of several permanently installed stainless steel bars.

The Cliffs, which are about 60 feet high, descend to a little ledge just above the water. You begin your climb by rappelling down or getting "lowered" to this ledge. You then climb back up the cliffs, belayed from either below or above. Even though the climb is fairly short, the ocean views are spectacular! These cliffs are perfect for the beginning climber, as they are not too difficult. And what's nice about this cliff is that the routes are close to each other so there's no need to hike a long distance between climbs. Kellie set up anchors on two routes for us; Wounderwall Right (5.6/7) and In The Groove (5.5).

On climbing day there were mostly overcast skies with very few brief periods of sunshine. We shared the cliff with a crowd that also involved the local climbing school.  All of us rappelled down to the ledge and made at least two climbs back up to the top of the cliff. And I learned how to belay from the top. After climbing we packed our gear into our cars and hiked up the path to Thunder Hole. It was still low tide so the crevasse was bare except for the occasional wave and the small crowd was growing with folks coming in for the high tide.

Overall, Otter Cliffs offers a exciting climbing experience! It was both thrilling and beautiful to be rock climbing over the ocean.  And although it was overcast, the pounding surf added to the excitement as we belayed one another.

Many thanks to Kellie, Noreen, Jane, Beth, Anne, Kim and Simona for a day of adventure, laughter, good times and fond memories. It was empowering! <3 <3 <3
at September 09, 2012

It looked like rain as I was headed north for today's hike. And there were passing showers as I drove by the Kancamagus Highway. At the trailhead on Route 302 there was just a couple more empty stalls in the upper parking lot. I re-checked the weather forecast, "sun for the afternoon", and quickly got my gear on.

I started up the trailhead and crossed over the train tracks and ascended up an old logging road. I took the Ethan Pond trail northwest after passing the Arethusa-Ripley Falls Trail.

It's a very steady climb and at the Kedron Trail junction I stopped to take a short break and let a group of 7 pass me. The book doesn't say how steep the start of the trail really is so I was somewhat surprised.

I caught up with Group 7 at the Willey Range Trail junction were we all stopped for a break. We spoke a bit about 'lists' and I told them that I was working on the 4000ft+ as well as the Terrifying 25 lists. They were on their way to Willey, Field and Tom, with Avalon being the 'bail-out' plan. And we also introduced ourselves and started back up the trail again when I told them that they were a good pace for me.

From there the trail steadily steepened. Then my stomach started making noises. I stopped to listen...oh, those were hunger noises! I tried to ignore them but the more I continued, the louder the protest! Group 7 stopped for a break and so did I. But I needed more than a minute of water and rest. And so I stayed back eating my energy bar when Group 7 started back up again. It was nice sit and enjoy a quick meal in silence and solitude. There was a slight breeze and the sun started to come out.

One of many water crossings

Someone left mushrooms on the trail

I was at the Ladders section, finally! I had seen photos of this section and was eager to try it out! I quickly took out my Canon dslr and spent 10 minutes taking photos before ascending the ladders.

There were 9 Ladders total and a couple of them were really steep! It didn't take me very long to ascend all of them. I was able to get off one of the ladders to take a side view  photo to show the grade.

At the top of the ladders!

The remainder of trail continued to be steep with parts of rock scrambling.

Near the top I turned to look behind me to expecting to see views of Crawford Notch. There were clouds coming in, and fast! I quickly scrambled up the last set of rocks and took the path off to the right to the east lookout. The temps here were much cooler and the clouds moved quickly by.

I continued onto the summit, it was just a feet from the east outlook and made note of the cairn. There was no benchmark or sign....just a lone cairn to distinguish the summit. I continued down the main trail to circle around to the south outlook. The sun started to come out and I took a few more photos. It was warm under the sun here, so I sat and quickly ate my lunch, again enjoying the silence and solitude.

After lunch I went back to the summit cairn and took a couple more photos.

I quickly glanced at the time, it had been 30 minutes since I first summited and I needed to get back down to the trailhead. At the trail to the east outlook I bumped into Greg. He hadn't seen the little outlook sign and so I lead him to the east ledges where the sun had come out. We started talking about hiking and I showed him how my iPhone Peaks App works.

Crawford Notch from the east outlook

Webster Cliffs and Mt. Jackson from the east outlook

He told me he just had his right knee replaced a year ago, showing me his scar because I didn't believe him! Greg was out enjoying his hike and testing his left knee to see if it would hold up. And I told him about my husband's right knee replacement two years ago. We weren't alone though.....   Greg spotted a Gray Jay eying us. We quickly offered some crackers and granola and second showed up.

By now I had been on the summit for an hour so it was definitely time for me to go! I told Greg I'd mention him in my blog and he could find me through Google. So Greg if you're reading this, hope the rest of your hike went well! I started back for the trailhead. But I had to put my trekking poles away because I found them annoying when having to downclimb the steep, slabby portions of the trail. I passed more hikers on their way to the summit, telling them, "You're almost there!" and "Happy Trails!" And I reached the Ladders in 20 minutes and stopped a bit to take more photos!

I brought it with me but didn't wear my knee brace on today's hike because my knee wasn't bothering me at all. But about an hour into my descent my feet started to bother me again! I was annoyed and checked the lacing on my hiking boots. The laces didn't loosen up today like they had on my Flume/Liberty hike the week before. But the bottom of my feet, particularly the balls of my feet, were starting to hurt, curse it! Back on the Ethan Pond Trail there were several other hikers, some with dogs, hiking in the opposite direction.

Just 50/60 feet from the Arethusa-Ripley Pond Trail junction I could hear children's  voices . I looked down at the trail floor and noticed loose dirt, put my right foot forward on it and down I went! I landed on my left knee and at first was afraid to get back up for fear of not be able to! My left knee is arthritic and I thought I had injured it badly, curse it! I can't believe I slipped, curse it! I should've worn my spikes! I slowly got up and checked my knee. It was scratched up pretty bad and hurt as well (curse it!), but I needed to get off the trail and back to my truck. At this point I took out my trekking poles for the rest of the way. Luckily, I was only minutes from the parking lot and even more luckily, was able to walk back on my own. At my truck I cleaned up and put a ice, cold water bottle on my knee.

This hike, particularly the Ladders section, was fun! I met some really very nice folks on trail and the views at both outlooks were beautiful! 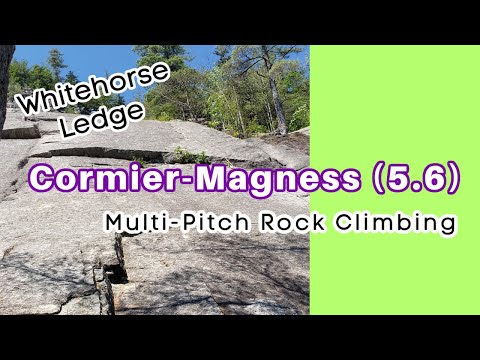