Showing posts with the label Chia
Show all 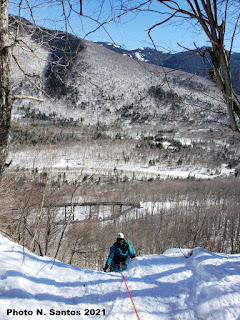 At the top of Chia Beautiful day for ice climbing!  This was the first time I ever ice climbed in the 'Amphitheater' so I was stoked that Nuno had his sights on Chia ! At the base of  Chia (WI3+), there was already a party of two climbers who were just gearing up. We took a few photos of them and watched as Tony made his way up to the top of the climb. Nuno did a fantastic job of leading. The Amphitheater was in 'full sun' and while I was belaying Nuno up Chia, huge chunks of ice came down from the Widow's Walk/Bob's Delight area. And Pegasus was packed, including a group for a photoshoot. Waterfall (WI3) was our second climb. No one was on it and for good reason, it was thin. But again, Nuno crushed the lead. Near the top was a mix of ice, rock, and dirt. And Nuno and I both agreed that climbing Waterfall was waaay harder than climbing Chia! Super stellar day of ice climbing Frankenstein Cliffs with Nuno. Plus, on our way back down the trail from the top of
Read more
More posts