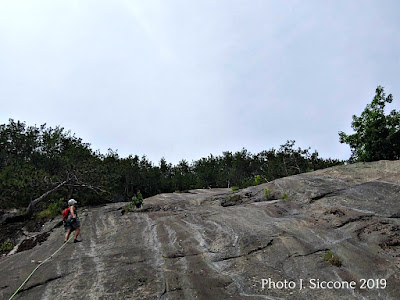 Making my way up the beautiful slab of pitch 5 on the DLM Memorial (5.7)

Met up with Jackie for another climb on Mt. Forist in Berlin, NH. This time to do some multi-pitch climbing. Not gonna lie, that 1st pitch of DLM Memorial route (5.7) sketched me out! So instead of going straight up, I climbed to the left (large flakes) and slung a tree branch/root. And then traversed right to the bolt for even more runout sketchy-ness! Intend to climb this route again so I can go straight up on the start of P1 instead of wimping out. :)

This route hasn't been ticked off of MP since 2017, but that doesn't mean no one has climbed it. A lot of sections were really dirty and looked like it doesn't see a lot of traffic. And in some sections, there was a lot of sand making for slippery foot placements. But overall, the route was an amazing adventure! 6 pitches with 6 rappels on a single 70m rope.

The night before I stayed at the Christmas Farm & Inn Spa. Super quaint and so quiet at night - I had a very good night sleep the night before our climb. Had a wonderful dinner in their dining room and then went for a walk around the premises. Thank you, Jackie, for your help and support for my "Turning 60 and Climbing About It" project!  With today’s climbing, I’m at 21 leads of 64 pitches! Enjoy some photos of our climb on DLM Memorial route and of the Christmas Farm & Inn Spa.


Looking up at the DLM Memorial route from the parking area.
Visible is P3 to the headwall on the last pitch. 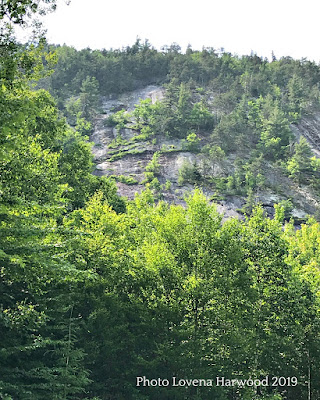 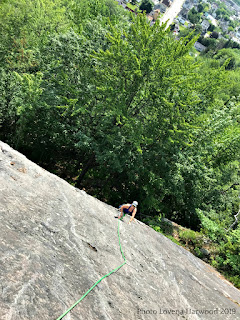 At the P2 belay station 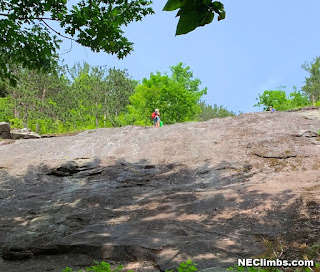 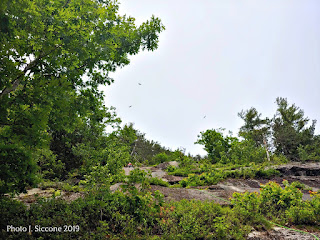 Going thru the gap of bushes of P3 was scary sketchy as the dirt was soft and moved under my feet. It felt spongey, like stepping on a pillow. (**lots of swear words used here)

P3 is only 85 feet so I climbed beyond the anchors and past 3 bolts to a tree on the left to set up an anchor. It was a nice shady place to take a break and get something to eat. From there, Jackie climbed passing a double bolt anchor used for rap line, and to the base of the slab of P5.

Bringing Jackie up the beautiful slab of P5.
P5 is indeed beautiful, it's all friction climbing!
5 bolts to a 0.4 cam under the flake near the anchors. 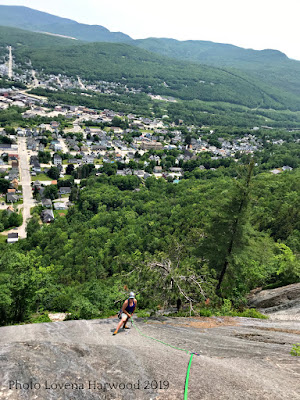 Looking down the slab of P5 and Madigan Street, below. 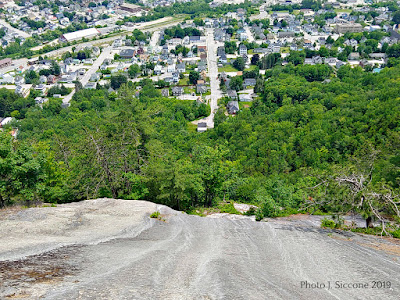 Left: Jackie making her way up P6.
Right: Jackie at the anchors of the headwall. 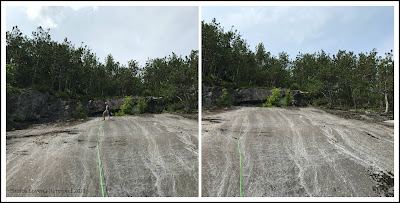 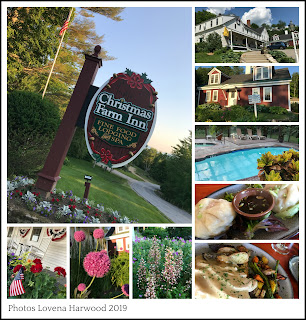