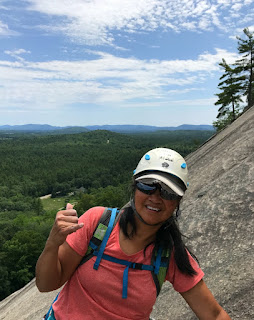 Shaka from Pitch 2 Belay of Sliding Board

I love climbing The Slabs of Whitehorse Ledge. But today I couldn't wait to get off of it! When the lead climber (of the group of 4 in front of us) starting shrieking, my only thought then was that Sean and I had to get the fuck off Whitehorse......

Although I was eager to lead, I was nervous because I had never climbed Sliding Board. I was also nervous watching the group in front of us. It was obvious that no one in this group knew where they were going. One of their lead climbers, who was about 20 feet above the second bolt of the second pitch, turned to a guide who was anchored in the "crystal pocket" and asked him where the anchor was. He answered, "10 feet to your left, or 100 feet above you." She traversed to her left and found the anchor. Lots of places to put pro in cracks, but she didn't put any between that second bolt and the anchor.

I was also worried that I wouldn't be able to place enough gear along the way to the anchor. The good thing about the pitch just off the Launch Pad is that Sean would be able to see me the entire pitch and could call out to me if necessary. The group of 4 in front of us went straight up from the Launch Pad and placed one piece of pro to the anchor. We didn't follow them. Instead Sean had me go up diagonally to the left. I placed 4 pieces (including a bolt) and headed off to a bunch of flakes with cracks near the section of bushes on the left. I thought Sean meant for me to place a piece of pro at these cracks before heading up to the anchor. I was just about to kneel down to place a piece in the crack, when Sean asked me where I was going. I had gone too far left so I ended up setting up an anchor at a small tree. It had a couple of worn grey webbing and two rap rings and is used to sling for the Wedge route. From there Sean lead up to the anchor of the second pitch. From where I was anchored at the small tree, I couldn't see him at the next anchor. That's when I heard Sean talking to the group in front of us.

From the belay station of the 4th pitch you can't see the lead climber once they cross over the dike. But from the belay station of the 3rd pitch, Sean could see the lead climber and asked him if he was okay. He told Sean that he couldn't find any place for pro and that he couldn't find the anchor. (I suspect he was looking for a bolted anchor.) Sean told him that he was 30 feet past his anchor and asked him where his last piece of pro was. It was an Alien 30 feet below him and it was his second piece with his first piece near the beginning of the dike....no pro in the left facing corner cracks. Sean told him he had to downclimb and build an anchor. The lead climber started downclimbing but his belayer couldn't see him and kept taking in slack almost pulling him off the wall and that's when the shrieking started.

At that point I really wanted to get down. As soon as I was on belay, I made my way up, crossing over some lichen and cussing the entire time. I got up to clean the piece of pro off of the anchor of P2, I yelled up to Sean that as soon as I got up to him at the anchor, we were going to rap down! It was nerve-racking - I watched the lead climber climb atop the crack where he was supposed to build gear anchor - but didn't, and almost witness him getting pulled off. This was turning into a shit show and Sean and I had front row seats to it.

Since the rap rings were at the end of the 3rd pitch, Sean and I climbed it. I felt worn out. Almost 4 hours to climb just 3 pitches and lots of waiting around - we did a lot more waiting than climbing. I couldn't wait to get down. I was supposed to lead that 4th pitch as well. But Sean and I would have had to wait for the anchor station below the headwall to clear. Plus, knowing that the lead climber almost had an 'epic' on that pitch was such a killjoy.

Other climbers, Owen and Steve, were on the Beginners Route and yelled down to the group if they needed any help. They were ready to rap down to them from the Standard Route, if needed. And if the lead climber did fall and injure himself, no doubt Sean and I would also stop to assist in every way possible. Too bad they didn't have a guidebook or a copy of the MountainProject.com beta with them. It's really important to learn as much you can about the route you're climbing, especially if you're leading it. If you fall and injure yourself it's not just about you. But it also becomes about your partner(s) and those other climbers and rescuers who come to your aid. And don't lie about your ability/experience. Sean and I were told that the lead climber had climbed this route before.

Few photos taken on our climb:
Waiting from the Launch Pad 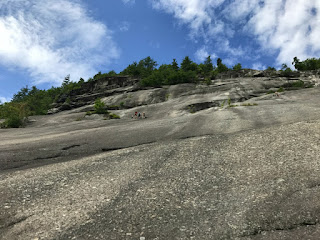 Blueberries on pitch 1 ledge of Wedge 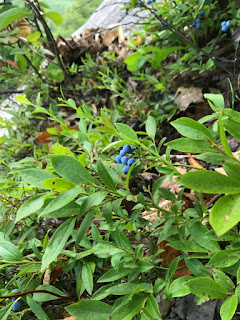 70m ropes from the tree on the "Wedge" route to
the P2 anchor. Used P1 anchor as pro. 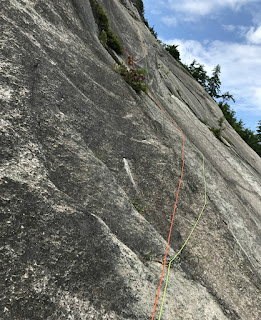 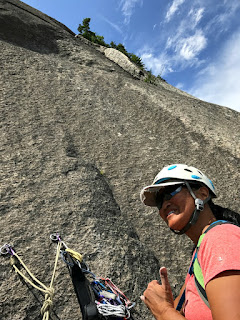 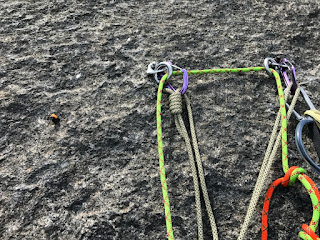