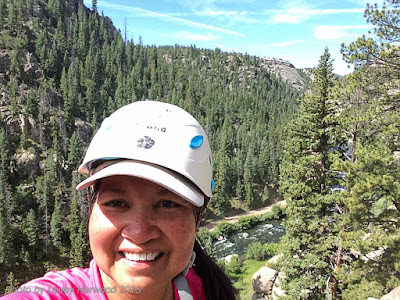 This morning we rose early to pack up and head out to the Turret Dome of Eleven Mile Canyon. I slept really well in this campsite! Actually, I slept better than any other night on this trip. :)  Which is a good thing since we were climbing this morning. We stopped off at a local convenience store and stocked up on breakfast, coffee and hiking food.

At the canyon, we parked at the picnic parking lot, geared up and crossed the footbridge over the South Platte River. We turned left onto the grassy area and followed a trail upstream. There were already many families out picnicking and fishing in this location. I couldn’t resist smiling and saying good morning to those that were along the banks fishing! 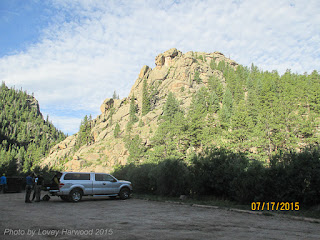 There was no one on the Dome!! Well, actually there were 3 other climbers who had come in after us but they jumped ahead of us onto the Schooldaze route by crossing over from the Knup route. They were at the start of the second pitch when Geoff and Jeff started. Kevin and I followed.

Geoff making his way up P1 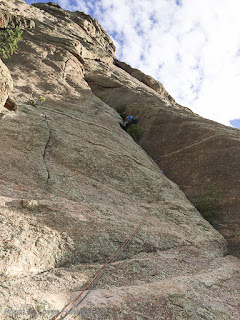 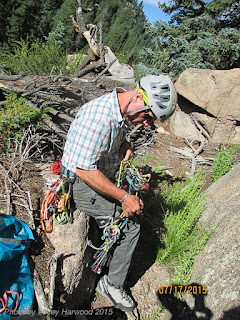 Kevin and I at the P2 belay station 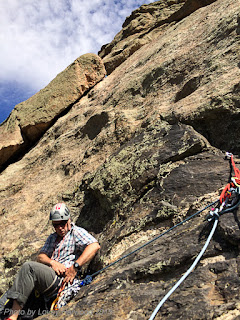 Geoff had problems with his two ropes, they got caught up under a corner. Jeff and Geoff tried flicking the ropes out from under the corner, but it didn’t work. So Geoff built an anchor short of the roof and they were able to work the ropes out. All that waiting around affected my asthma. But so long as I took in fluids and ate, I was fine. The "Bathtub" section of P2 is fun and easy - I wished I got photos! The climb went faster once we neared the top of the last pitch. The left facing corner/crack on the right side looks harder than it really is but it's super fun! Kevin and I followed Geoff and Jeff up over it and to the right to walk off down into a gully which leads to the bottom of the crag 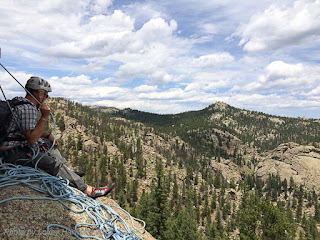 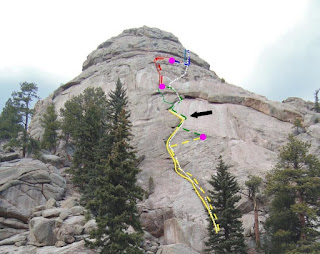 Turret Dome and the Schooldaze route. Using photo from Mountain Project with the solid lines already on it.

The black arrow is where Geoff got his ropes caught up. We used Kevin's new rope and it got caught up on an edge between his 1st and 2nd pieces of pro. So we flipped his rope over the bulge and that solved the problem. 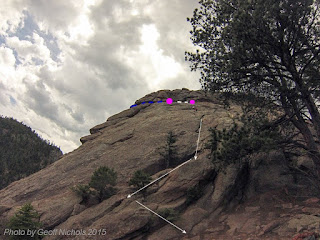 After coming up and over on the right, I belayed Kevin a few more feet so that he could set up his last anchor. Left: Kevin lowering me down to the gully.

Below, Jeff and Geoff at the gully which leads to the bottom of the
crag and back out to the grassy picnic area near the footbridge. 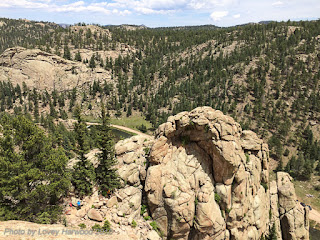 The Schooldaze route is a fun climb and the views of the canyon and the Platte River below were stunning! I couldn’t get over that it was a Saturday, great climbing weather and there were no other climbers on the Dome! 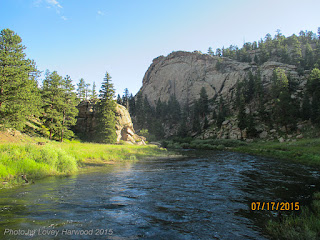 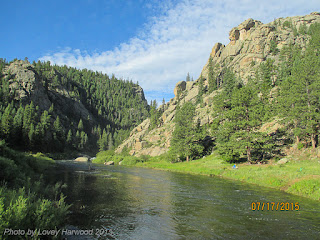 Back to Denver
After climbing we headed to Denver to check into a motel. We tried 3-4 places and all were booked/sold out. Jeff finally found us 3 rooms at the Ramada Plaza, Denver Central.

I didn’t/couldn’t smell myself, but I knew I needed a shower, LOL! It felt great to take a long shower and wash my hair. Afterwards, I called room service to order my dinner. Their Chicken and shrimp Fettuccine is very delicious! It included a large salad and I got a pot of hot water for my green tea bag - (I bring my own green tea bags because I lot of places don't have them). Off course, I couldn’t eat all my dinner, it was way too much food.