Climbing Frankenstein Cliffs in Crawford Notch is my favorite place to climb. I never get tired of the ride through the Notch or the views, as well. This weekend would be busy, in addition to those in our meetup group climbing, there would be other climbers in the North Conway area for the 2015 Mt. Washington Ice Fest as well as the AMC Boston Ice Climbing Program, not to mention all the skiers. My lead climbing partner for Saturday was Jeff S. After a hearty breakfast I met Jeff at the Arethusa Falls trailhead parking lot. We geared up and headed for the Trestle area. We came up to the Waterfall climb and there were already 5 climbers there. We didn’t realize until after we started setting up on the right that 3 of those climbers were with the meetup group! Jay, John and Fred were setting up two top ropes for those meetup group members on their way up. I seconded Jeff on this climb. The bottom portion of the climb was fun especially the two sections that were kinda steep. The top portion at the end of the route was crappy and dirty. But I learned that where there’s grass/vegetation, there’s dirt to sink my tools into.

Waterfall from the train tracks 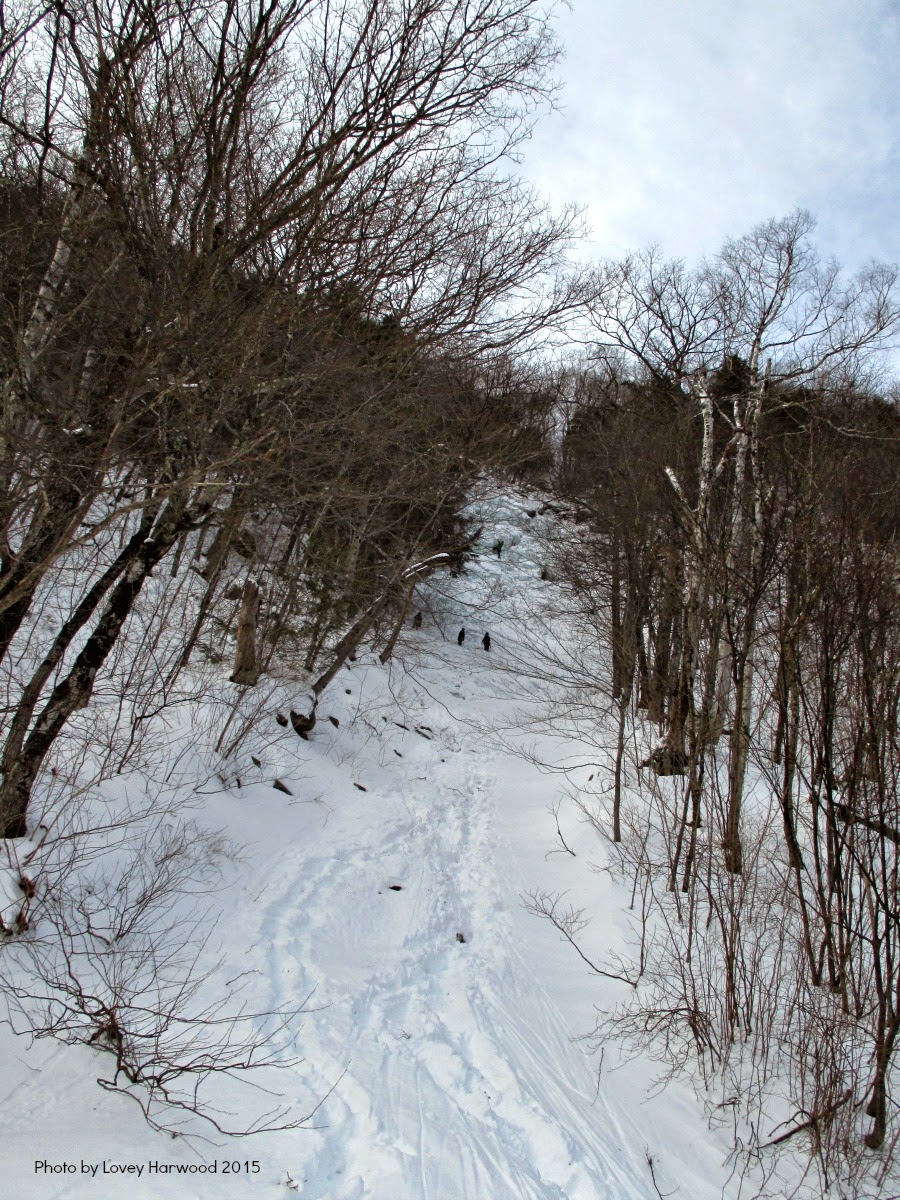 I seconded Jeff on the right side of the Waterfall route.
Catherine A. top roping the middle of Waterfall (red rope). 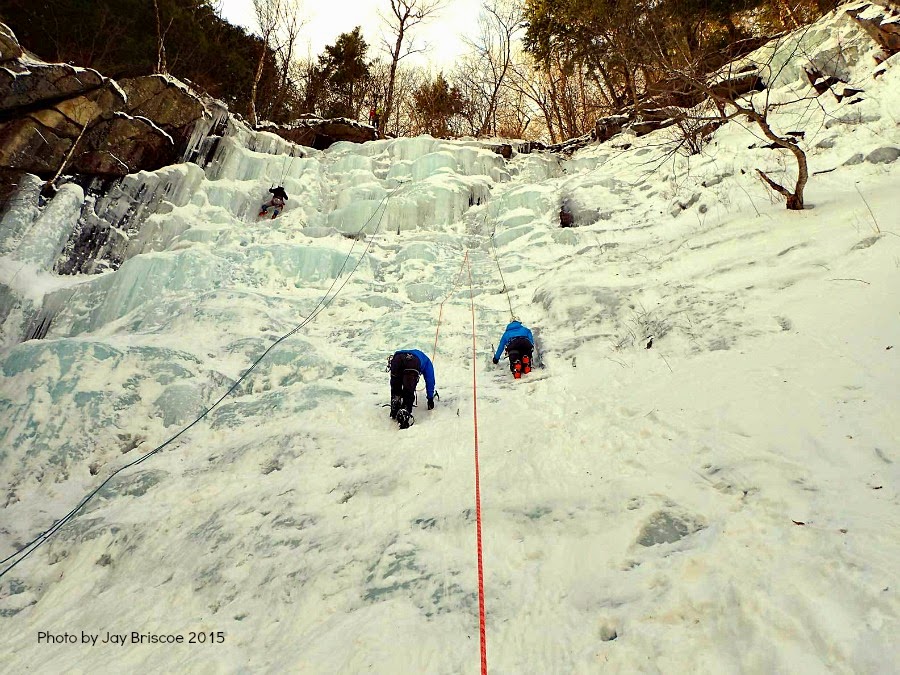 From the top of Waterfall 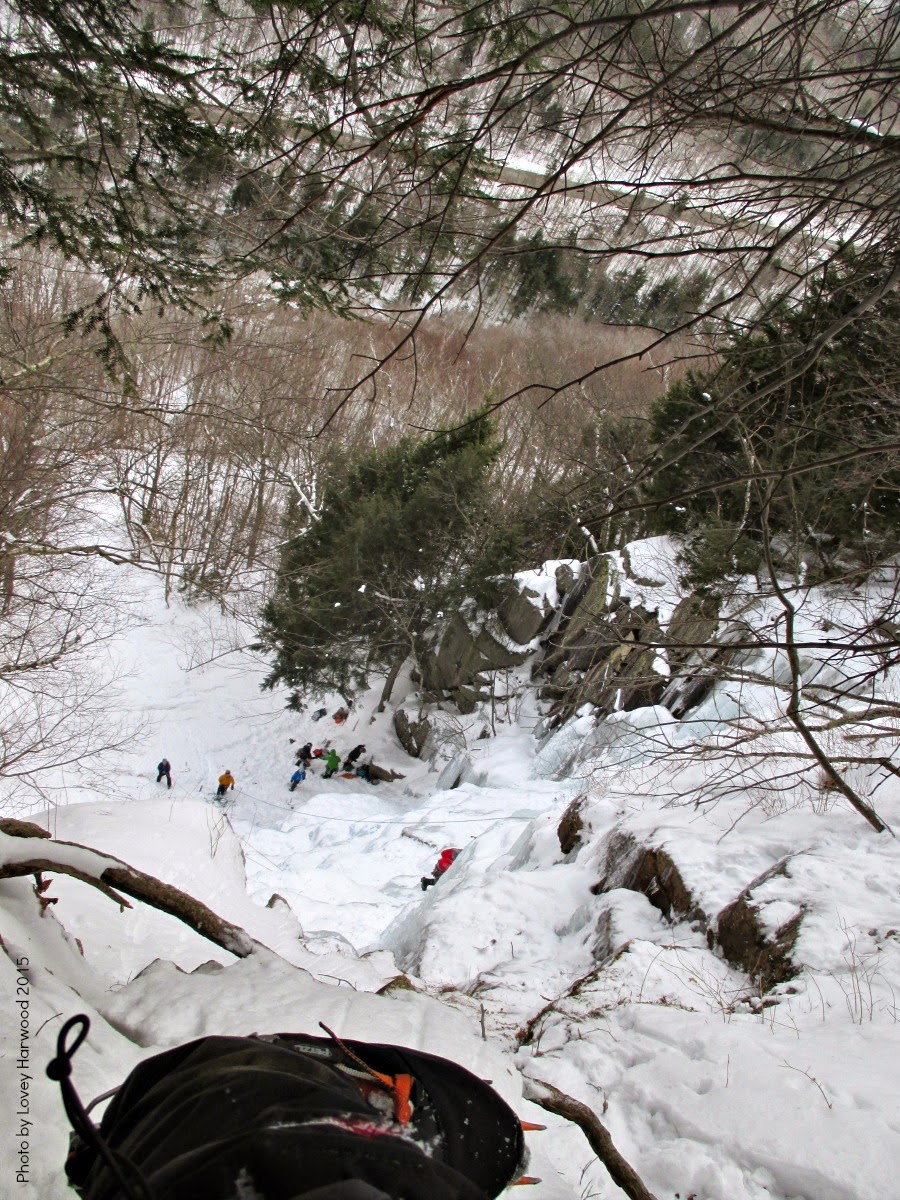 Afterwards, Jeff and I did the right side of the Standard Route up to the cave. From the cave we rapped back down to the first belay station. More photos . . . . . . 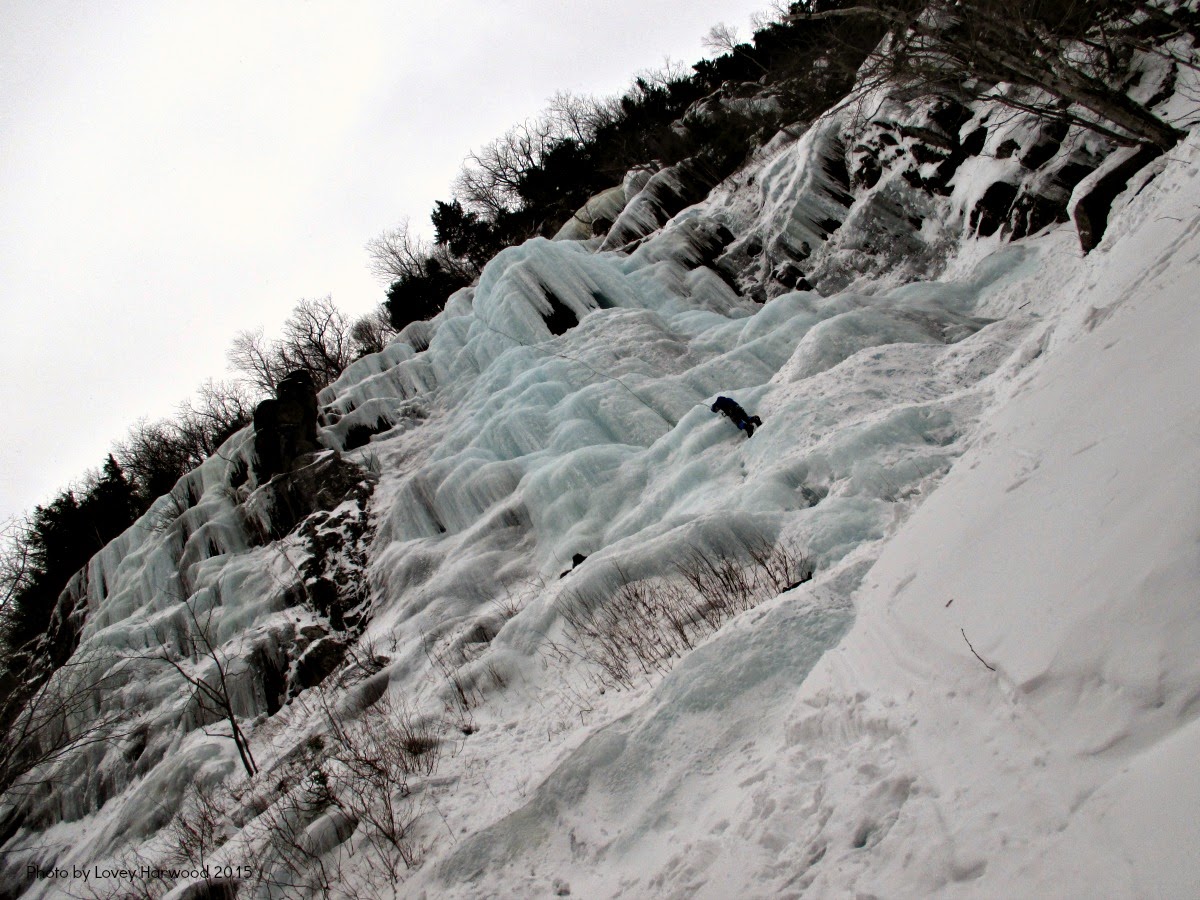 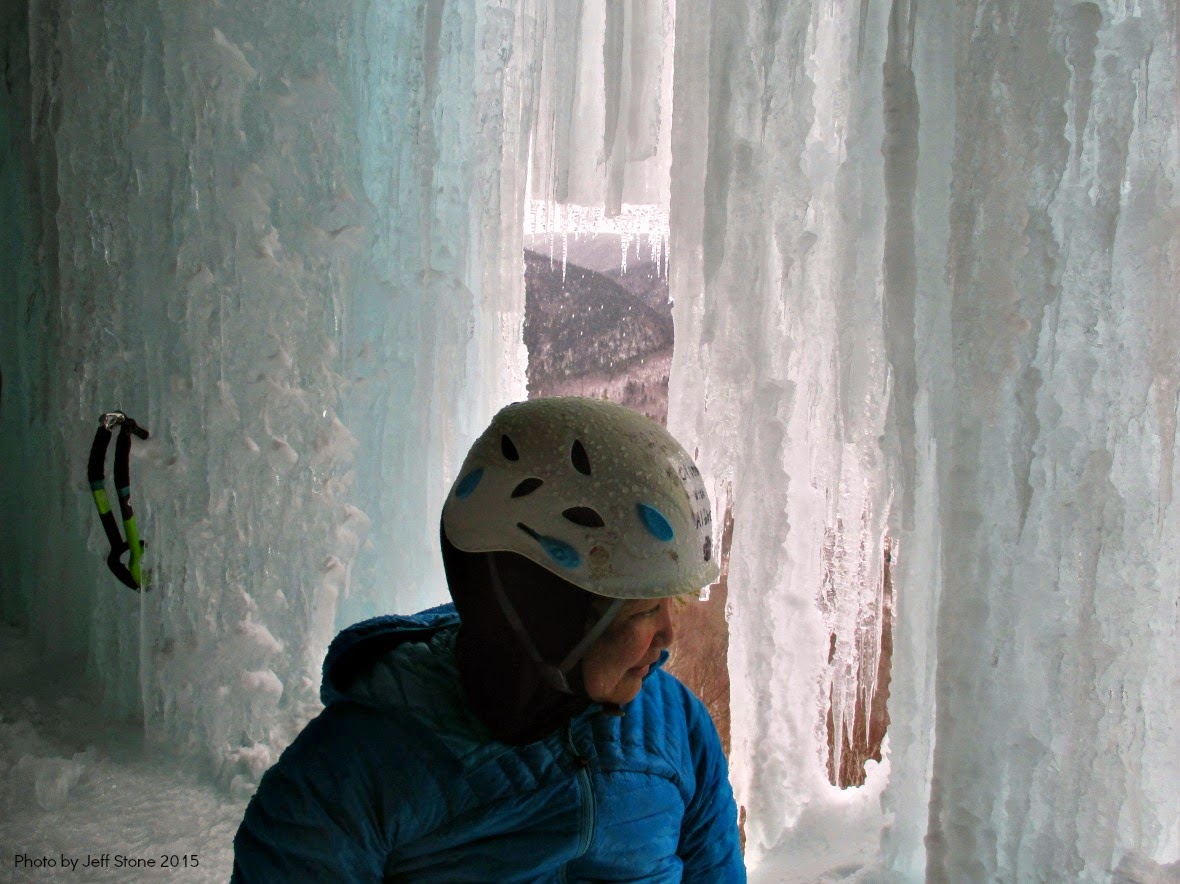 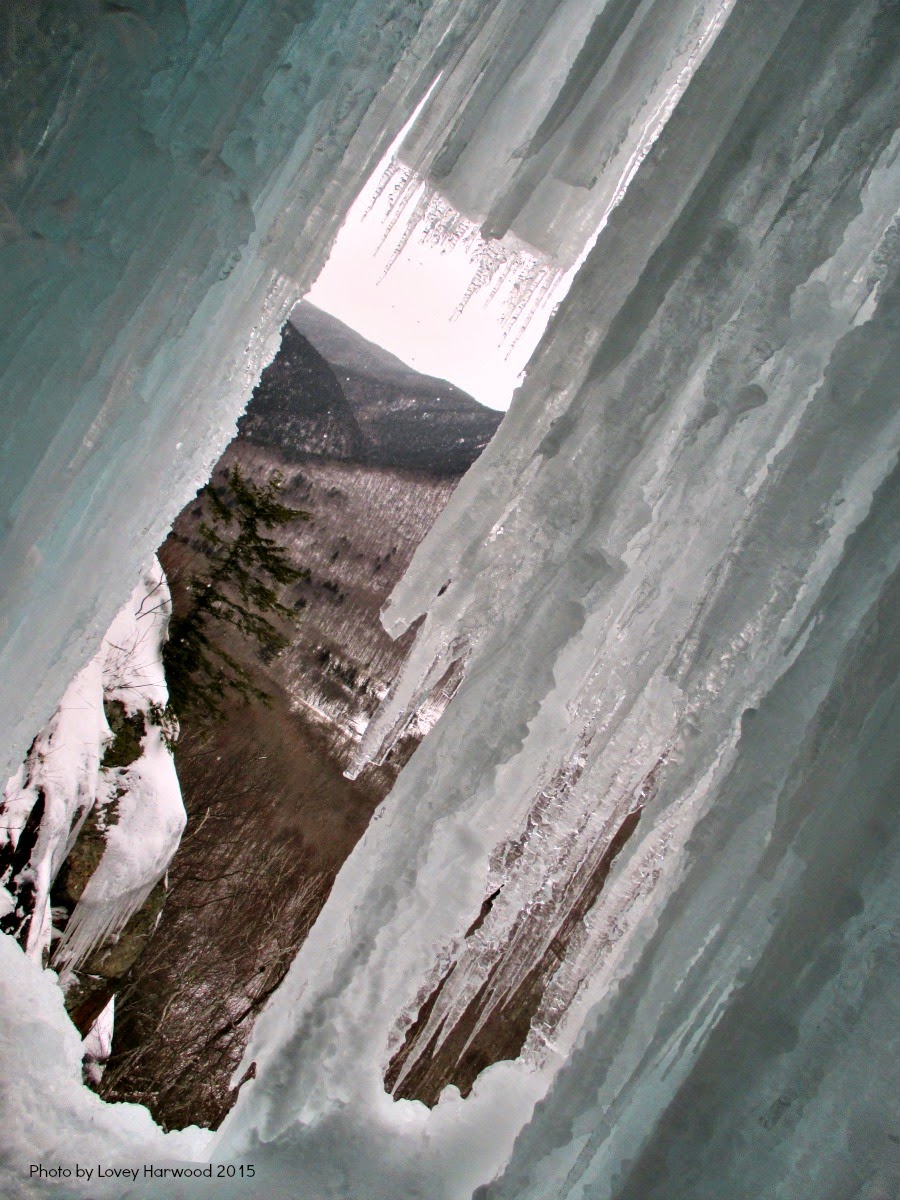 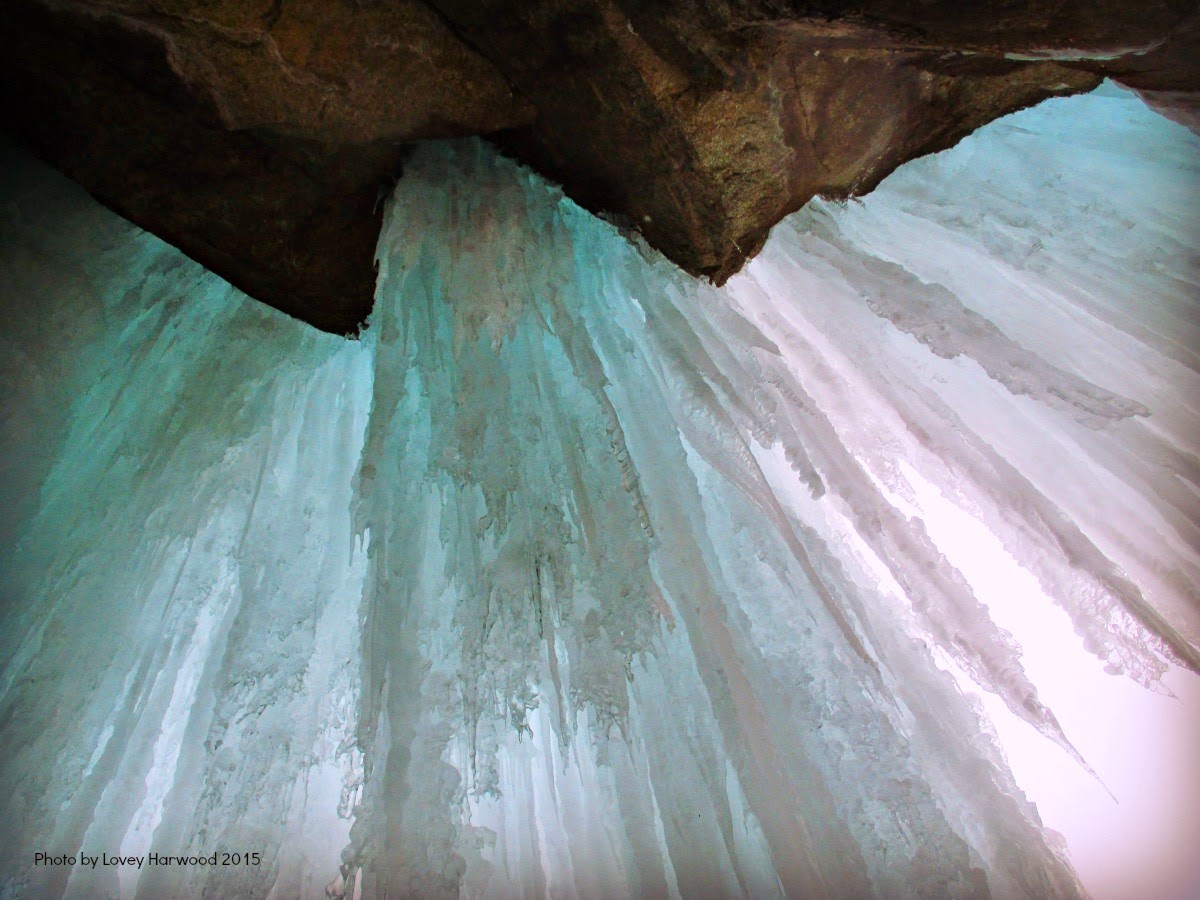 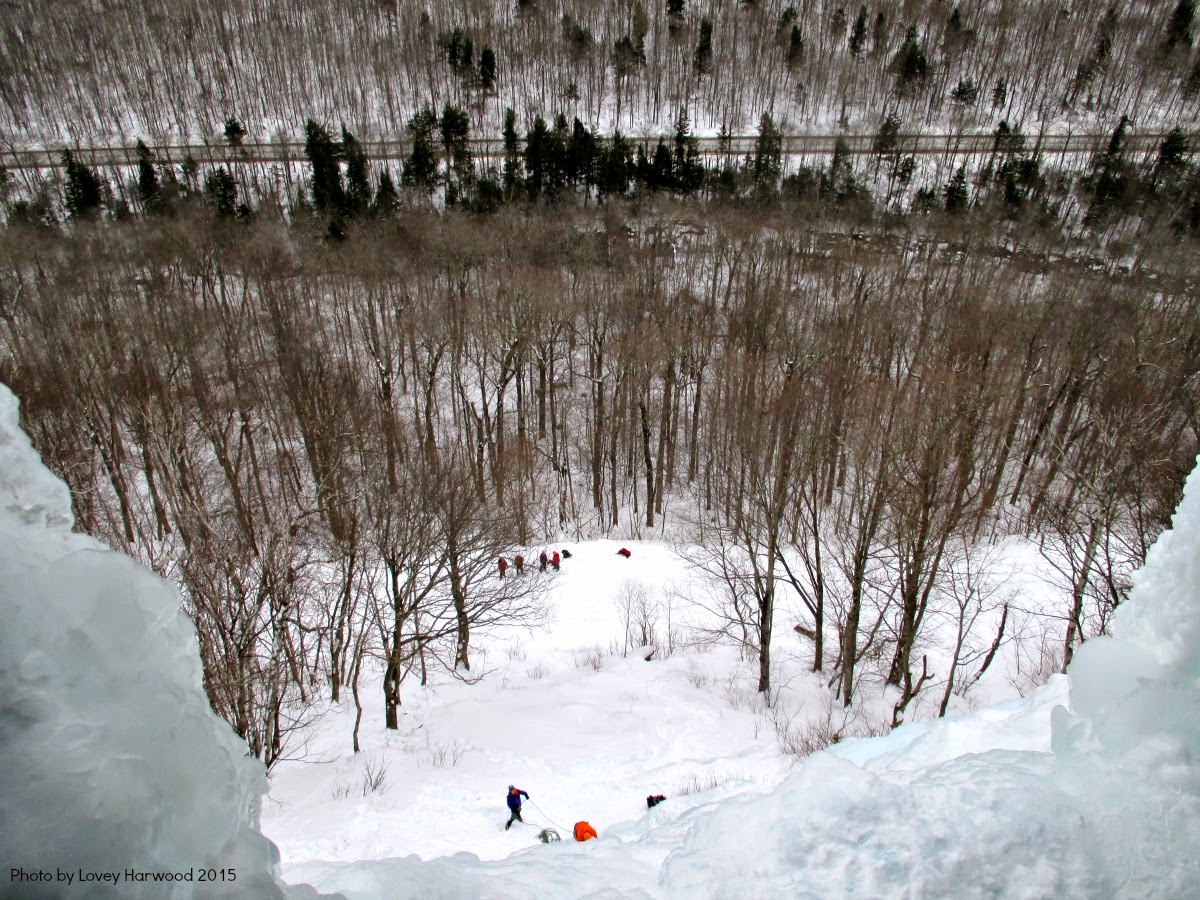 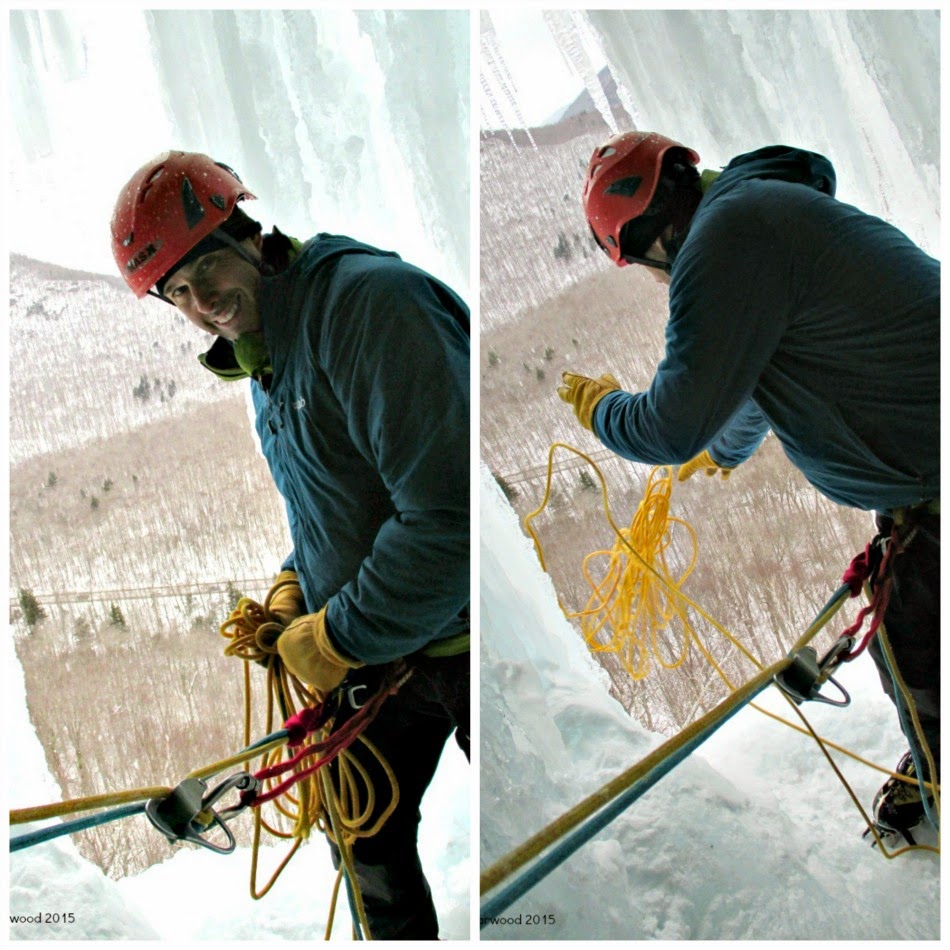 For dinner the entire Meetup group met up at the Flatbread Pizza place in the Eastern Slope Inn. We had a big group of 40 hungry climbers! After dinner it was off to Theater In The Woods in Intervale. There were slideshow presentations given by Miron Chlebosz who gave a short opener on the Tatras Mountains in Poland. Followed by featured presenter Alpine Exposures – Jon Griffith Photography with his hilarious and amazing photos, videos and alpine climbing experiences. There were also some really cool climbing gear raffled off! 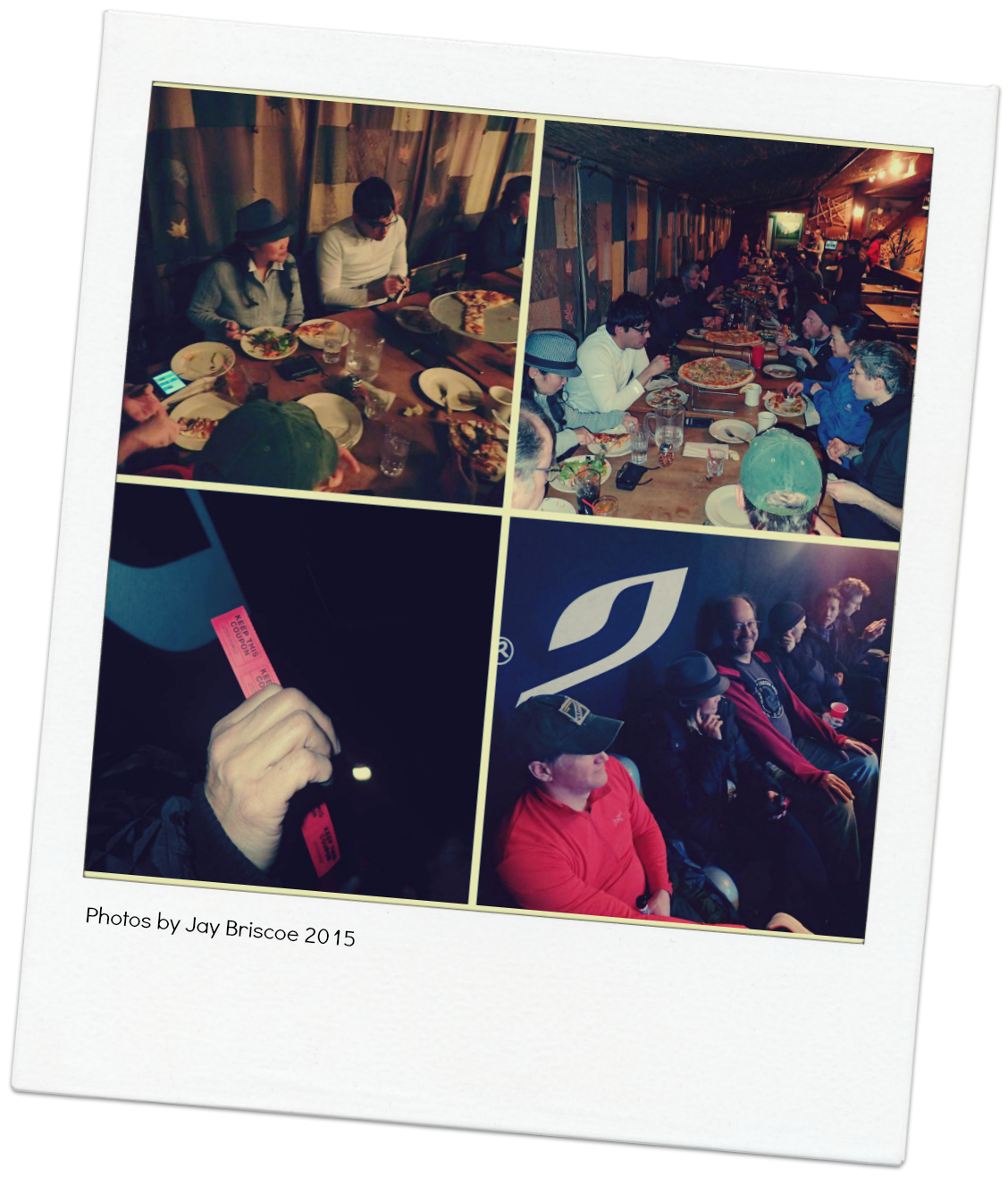 At the Cranmore Mountain Lodge B&B
For this trip, I booked a room at the Cranmore MountainLodge B&B in North Conway, NH. This was my first stay at this B&B and I was curious about the room I stayed in. I had read online that this room wasn’t recommended for tall folks as the bed was a short Double Bed. I’m 5’2” so I had no problem with this. I arrived on Friday afternoon and checked in. Freddie greeted me and gave me a tour of her home grounds - the TV room as well as the main diningroom and livingroom areas. I was very happy with my room. Even though its small, its perfect and I loved the large private bath and appreciated the large rubber tray for drying wet boots and shoes. Breakfast is served between 7:30am and 9am. And at first I thought that this might be a problem. But since I didn’t have to meet my leaders until after 9am, the 7:30am breakfast start would be just fine. When not climbing, I usually have a protein shake for breakfast. But on the mornings that I do climb (ice or rock) I eat a big breakfast. So both mornings I ordered hearty breakfasts including eggs bacon or sausage links and toast, everything was delicious! The first morning during breakfast I met Jeff and Bill, both from New York. We talked a bit about where we were headed for the day. The next morning at breakfast Jeff invited me to join them at their table so we wouldn’t have to hold our conversation across the dining room. Jeff and Bill come out to enjoy ice climbing in New Hampshire every year. Before leaving, we exchanged information. Jeff gave me a book of his hiking, backpacking and climbing adventures and I told him about my adventure blog and the Mountaineering, Climbing and Backpacking of New England meetup group that I belonged to. 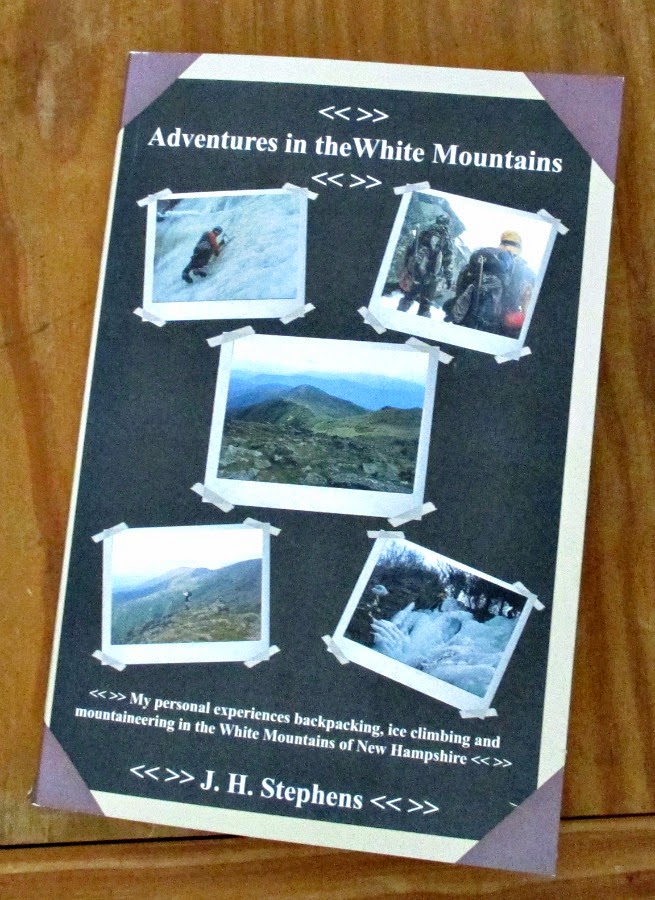 Overall, this weekend of climbing was amazing. I only got to climb one day but I met other climbers in our meetup group as well as other climbers visiting from out of state. And I didn’t bash my knuckles! :D
ice climbing ice fest mountaineering climbing and backpacking of new england meetup group The Standard Route waterfall