I got to lead the hike to the Mt. Osceola summit! It was my very first time leading a hike all the way to a summit over 4000 feet. It wasn't very fast (1.4mi/hr) but it was a steady pace. Our group (New England Over 50 Meetup) met up at the Osceola Trailhead in Waterville Valley, NH. It was a cool morning and I arrived in shorts and a short-sleeved shirt but changed into my hiking pants and put my long-sleeved shirt on as an overshirt. I would have preferred to hike in shorts, but I prefer not to have my legs eaten by mosquitoes.

This trail is beautiful but rocky which made for a bit of scrambling. Along the trail there were many large boulders and slabs, some of which were wet and slippery. After a mile the trail begins to climb with switchbacks towards the summit. We passed many hikers descending from the summit.  Just before reaching the summit area there is a large slab area. There are concrete abutments, remnants of a fire lookout tower.

At the summit there were about a dozen other hikers enjoying the views and cool temps. We were very lucky that the weather was sunny. The views were stunning! We took several photos including that of the East Peak. We spent about 30 minutes for lunch when Steve the organizer said I should hike onto the East Peak since I'm working towards my 48 4000+ footers. Fellow hiker Mel wanted to bag the East Peak as well, so the two of us set off for an additional 2 miles.

I had not read up on any hike reviews to the East Peak, so I had no idea what to expect. Right before the main pass between Osceola and East Osceola, the trail is extremely steep and rocky. But what a wonderful surprise! There is a near-vertical section called The Chimney! Heart be still, a little bit of free solo rock climbing thrown in! But if one must, both ascending and descending The Chimney can be entirely avoided by an alternate route off to the side.

There are a couple of steep passes before the trail reaches the summit. The East Peak summit is located below treeline so there isn't much of a view anywhere from the summit, which is marked with a cairn. At the summit, Mel and I took turns taking one anothers' photo and then headed back toward Mt. Osceola. On the way back we went up The Chimney. For an instant I asked myself what was I doing on this piece of rock without a top-rope! But just as quickly, decided that I really didn't need no stinkin' top-rope for there were more than enough solid hand and foot holds on this climb. The Chimney climb was fun but all too short!

At the Mt. Osceola summit, Steve, Cindy and Elaine had waited for Mel and I. The rest of the group had gone ahead to descend. It took us 2 hours to get back down to the trailhead. When we left the summit, there were cool, gentle breezes. But on the descent the temps had warmed up and I was glad to get down the trail to some cool refreshment and salty snacks. The East Peak wasn't on this schedule for this meetup group so I wasn't expecting to make a second summit but, I sure am glad that I did!

Sidenote: 15lbs on my back for this hike. I used a new backpack and larger Camelbak. I usually use the Osprey Talon 22 but decided to use an Osprey Talon 33. For the Camelbak I went from the 70oz to the 100oz Antidote. My camera weighs at 2.5 lbs. I plan to slowly build up to 30lbs for this winter season.

On the trail to the Mt. Osceola summit

Views from the Mt. Osceola summit (2)

Trail towards the East Osceola summit 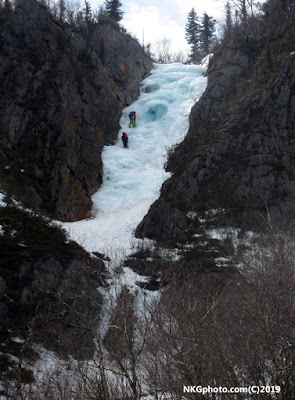 Bringing Jackie up the 1st pitch of Parasol Gully (me in the bright green pants) Looking up at Parasol Gully (WI2+) from the pullout, we had no idea if the ice was good. In fact, I was actually skeptical. But Jackie said, "let's go take a walk up there and check it out." And so we did. And I'm so glad that we did. Jackie and I had been considering Parasol Gully since last October, but weather and other plans always got in the way. Today we were staring up at fat blue ice, in the shade. I can certainly understand why this route would be on the list of the top 10 ice climbs in New Hampshire. The climbing is fun, straight-forward. And the views of the notch from along the route are gorgeous! We even bumped into Nick and Isa who climbed a couple of laps on the route. This climb was a little over 3.5 hours drive from my home in Massachusetts. So I opted to stay overnight in Colebrook. I had dinner and breakfast at the Wilderness Re
Read more